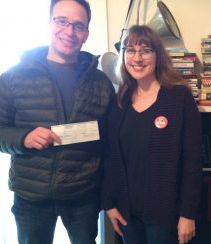 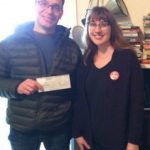 CUPE 4163 President Greg Melnechuk presents Kaitlyn Matulewicz of Victoria’s Retail Action Network with a cheque for the Social Justice Fund donation. As a 4163 member, Kaitlyn nominated the R.A.N. in the spring of 2016 for the SJF. They  support Victoria “workers that are owed wages, tips, or respect from their employer….organizing public pressure and direct action campaigns against bosses that exploit.”

The CUPE4163 Social Justice Fund is contributed by CUPE4163 members contributing $1.00 deducted from pay in November of each year.  One half of this sum is distributed at the AGM (spring meeting) and the other half of the sum at the Semi Annual General Meeting (fall meeting).  Members are entitled to nominate a charity prior to each meeting.  At the meeting the member is allowed to give a one minute speech promoting the charity they nominated and then the membership votes as the last order of business, on which charity will receive the social justice fund from that meeting.